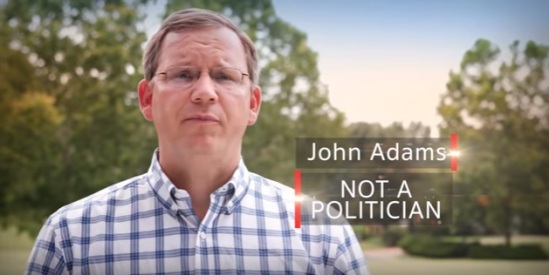 This is John Adams.  Not Founding Father and second President of the United States, John Adams, but Richmond, Virginia lawyer and 2017 Republican candidate for Attorney General, John Adams.  John Adams is not a politician, as his ads will repeatedly tell you.  He’s never held political office.  Never sought a political office.  He is running as a outsider.  And he’s not alone.  Two years ago, Donald Trump began his campaign for president with a similar theme.  A non-politician that will “drain the swamp” and run government “like a business”, pointing to all the actual politicians and blaming them for the ills of the state of government.  This is a common theme with Republicans running for office, to tote their inexperience in and with politics and governing as a good thing.  And it doesn’t just stop with candidates.  It extends to those in office, appointed or otherwise.  The President has filled his cabinet with those who not just lack experience with government but insist that it makes them more capable for their job.  Earlier this month, Secretary of State, Rex Tillerson was confronted with a news story of some “criticism” of the president that he was to have reportedly said.  Of course when one administration official verbally insults another, that’s definitely newsworthy.  Particularly when it’s a president who has made “insult” synonymous with “presidential”.  Yet, when asked about it, Tillerson dodged, saying he “doesn’t understand Washington” and “not from here” as if his being an outsider inoculates himself from the inside politics that they all are subjected to.  Betsy DeVos, Steve Mnuchin, Wilbur Ross and Ben Carson, along with Tillerson, have no significant experience in government and that isn’t just okay, but it was a positive quality of benefit to being selected as cabinet offiicials.

But in what Bizzaroworld Back Assward Universe is this ever a good thing?

When has not having experience or familiarity with what you’re dealing with not a bright red flag?  This weekend millions of Americans will watch football and there have been some pretty significant injuries on field.  Try to imagine a back up quarterback coming in the game and say “I’m not a football player, so I’m not tainted by all the back-breaking, body-aching running and hitting the football players do.”  Or one day, you or a loved one is hurt, you go to the E.R. and doctor tells you “I’m not really a doctor, but I know better than all of those nurses and orderlies and I’ll just get rid of them.”  Does this sound reasonable?  How about this; We’re still pretty early in the school year, so it isn’t hard to imagine going to school for your kid’s parent-teacher conference and you walk in the classroom and you hear the teacher say “I’m not a teacher but my experience putting up the dry wall at the new Arby’s qualifies me to get your child to pay attention, while managing an entire classroom.”

That is not how the real world works.  In no sector or institution of life or society where your well-being is dependent on another would you ever be, not only okay with their ignorance of the institution you need them to be knowledgeable about, but you prefer their inexperience over someone that actually KNOWS their profession and what they’re doing.  But for some reason Republicans think this is a badge of honor.

Granted, the entire idea of a Democracy is a government of the people.  It is not an aristocracy or a monarchy, where there’s a specific class or sect of persons that are groomed to lead or expected to govern.  We select our representatives and leaders of those among us.  That’s why this strategy is so appealing to their party.  They are supposed to be everyday people that share the same hopes and fears as the rest of us, which gives them the knowledge to be better stewards of our lives.  Of course that’s the idea in theory.  In practice, almost EVERYONE have had some elected or political experience with government in some fashion.  All but one of our Presidents have had at least some direct or indirect relationship with government.  That one is our current one. (Yes, four others have not held political office, but those four also just won wars in which they served and answered directly to the governing bodies.)  Moreover, for anyone attempting to achieve higher office whether it be governor or senator or even congressman, more often than not, they’ve held office before on a lower state or city level.

However, what’s more important than holding elected office is the institutional knowledge that comes with that office.  The knowledge of what works, who to work with, how it works, why does it work.  A lot of that comes with time, but it also comes with those around you.  If a teacher needs help in a classroom, they can ask another teacher.  If a doctor needs help with a patient, the doctor has a nurse.  A quarterback as a whole team that helps win the game.  If you do not have the experience, you bank on those that do.  Aaron Rogers didn’t win the Super Bowl, the Green Bay Packers did.  When I had my surgery, the O.R. doctor wasn’t alone.  I know because there was an anesthesiologist that put me under.  I was not educated by just my 2nd grade teacher.  I am a product of an entire school system of over 50 teachers and a half dozen schools.

And it is here is where the Republican “But I did stay in a Holiday Inn Express last night” Philosophy falls apart.  Attorney General Candidate John Adams isn’t the neophyte he claims to be.  He’s been involved in Republican politics, donating to Republican candidates for years.  He’s hired a campaign staff that has run not just a capable and credible statewide campaign, but are political veterans of multiple Virginia campaigns.  His ads attacking Attorney General Mark Herring are your standard “liberal” attacks, blaming him for not doing his job or using his job for political gain.  If it looks like a duck and quacks like a duck then it definitely did not stay in the Holiday Inn Express.

Likewise, the president is no different either.  Quite frankly he’s taken it to a pathetic new level.  Despite the belief that he’s the everyman that is beyond petty politics, he’s the worst kind.  In a institution where money interest often dominate the narrative, he has been the literal “Middle Man” between both Democrats and Republicans and the interest of those that are not of the people.  That is beyond his insistence on inserting his unrelenting ignorance on foreign matters, social and domestic matters and his predecessor’s every decision.  Which doesn’t even begin to describe his association with the movement he lead with every authority on questioning the right, ability and education of President Barack Obama.  Yet, I’m supposed to believe he’s not a politician.

And this is a the cycle repeats itself.  And the people are duped into believing this bullshit.  In a vain attempt to pretend they’re something new and different, they’re actually just another cog in the political machine.  But if you choose to believe them, do.  Just realize you would never want a player that’s never played the game before.  Or a doctor that’s never practiced.  Or a teacher who has never taught.  So why would you want one to govern who’s never governed?  Who takes pride in his unfamiliarity with governing?  You do because you know it’s bullshit just as well as they do.  And with that, you can call yourself blind or you can call yourself dumb.  Not really a middle ground.

You know who they are.

So when you hear them say “I’m not a politician,” ignore them.  They are.  What they’re really telling you is that they’re shit at being one.