Last week, 21 year old Dylann Roof left his home near Columbia, South Carolina and drove to Mother Emmanuel AME Church in Charleston, South Carolina.  When he arrived, he entered and sat along with State Senator, Rev. Clementa Pinckney for their Wednesday Night Bible Study.  When the Bible Study had ended and as the group began to disband, Roof pulled out a .45 caliber firearm and shot to death Rev. Pinckney along with eight other individuals before departing the church and fleeing the state.  Within the next 14 hours, Dylann Roof was found just outside of Charlotte, North Carolina and arrested for the murder of Sharonda Collins-Singleton, Cynthia Hurd, Tywanza Sanders, Myra Thompson, Ethel Lee Lance, Daniel L. Simmons, Depayne Middleton-Doctor, Susie Jackson and Clementa Pinckney.

In the days since, there has been a great deal of conversation about Dylann Roof’s motivations and reasonings, mainly of which made clear by Dylann Roof himself on his car in his home and through his social media.  Dylann was an unapologetic racist and like most racist brandished a symbol that was in line with his beliefs.  That symbol, known as the “Confederate Flag” is the same flag being flown in front of the South Carolina Capitol building.  Calls to have it removed from the premises, which has been going on for decades have intensified for those that oppose, while others have simply dodged the question, ignored it’s power and symbolism by saying it’s removal won’t fix anything or have even taken a tact as many Republican candidates for President have taken and ironically claimed it to be a “state’s rights” issue saying it has no bearing on their running for President.(I mean of course it doesn’t.  It isn’t like they’re looking for African-American support afterall, right?)  Mainly however, the resistance against the flag’s removal comes from those who insist on it being a symbol of their heritage and those who oppose it need to be educated about it’s history.

Well, courtesy of Your Friendly Neighborhood Black Man, allow me to educate you about this particular flag’s history.

154 years ago, after the election of Abraham Lincoln won the November 1860 on a campaign that opposed the expansion of slavery, the seven states in the lower south of the United States voted for succession and entered into an unrecognized confederation adopted in February of 1861.  A month later, German/Prussian artist Nicola Marschall created a flag for this Confederacy known as the “Stars and Bars”.  The flag he created was the first flag recognized by the Confederate States of America.  The flag he created bared a striking resemblance to the original flag of the United States created some 90 years prior.

The picture above is the ACTUAL Confederate Flag, also known as the “Stars and Bars”.  The representation that most now associate with the Confederate flag is something else.  It’s genesis is in the Confederacy army of Northern Virginia.  Army divisions typically have their own flags to signify the specific unit apart from others.  General Robert E. Lee’s Army of Northern Virginia brandished a square(not rectangular) flag, which was never the official flag of the Confederacy.

As the Civil War commenced and the Army of Northern Virginia had some early successes, many southerns began to adopt their flag for other purposes.  One of those purposes was for a redesign of the Confederacy’s new flag designed by WIlliam Thompson, known as the “Stainless Banner”.  This new flag took use of the Army of Northern Virginia’s battle flag and placed it in the corner of a all white flag.  Purposely made that way, Thompson referred to his flag as the “White Man’s Flag” because it was to symbolize the “supremacy of the white man.” 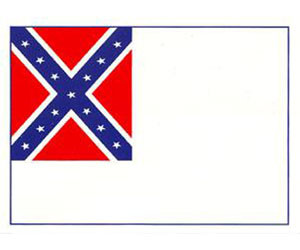 This flag would last until a month prior to the end of the Civil War where it was replaced by a variant that included a single solid vertical bar on the far right side.

Naturally when the war was ended, use of these three flags ended as did the rebellion that officially used them.  However within the years following and the adoption of the 13th, 14th and 15th Amendments to the Constitution, resistance to the Union continued, this time without the sanction of law with the exclusive intent to maintain the way of life prior to the end of war.  This meant a lower class of citizenry of Black Americans in the southern United States.  Terrorism was often employed by those who resisted which used tools such as the white mask and sheets of the Ku Klux Klan and a rectangular version of the Northern Virginia battle flag rejected from use prior to the Civil War.  These tools were used specifically to terrorize Black Americans from voting, running for office, buying property and several other aspects of life in the American south.  Over the next 100 years, the Virginia battle flag became a symbol that carried a singular meaning to Black Americans, which had nothing to do with heritage, but everything to do with hate.  The ONLY heritage it has been used to represent was with the Ku Klux Klan, the White Citizens Council and others resisting racial equality and carrying out violence in the name of fear, hate and terror.  In fact, in April of 1961, in commemoration of the Centennial of the first shots fired of the Civil War in Charleston, South Carolina, the South Carolina House of Representatives voted to place the flag on top of it’s state capitol building where it stayed for the next 40 years.

in 2000, lead by the efforts of Governor Jim Hodges, the South Carolina Senate and House of Representatives compromised on a deal to remove the flag from on top the State Capitol.  Retiring the rectangular version of the flag, the original Army of Northern Virginia Battle Flag was placed at a monument to Confederate Fallen in front of the Capitol building.

That is the official history of the “Confederate Flag”.  Now, apart from the paradox of South Carolina’s willfully displaying a Northern Virginia flag, opinions of the flag have remained strong.  A Pew Research Poll conducted in 2011 found that while 9% had a positive reaction to the flag, a more overwhelming 30% had a “negative reaction” and since the African American population is only 13%, it can be surmised that more white Americans have a “negative reaction” to the flag than those that have a “positive reaction”.  Meanwhile, the flag is nearly universally offensive to Black America.  With this being the case, for individuals to take a ambivalent stance or at best, hands-off approach at it’s display, particularly of those seeking to represent the vast majority of Americans that care not for it, is at best a cop-out and at worse a gross negligence of tacit acceptance for something that shouldn’t be displayed in any sort of official capacity.

Will removing the flag from it’s place in front of the State Capitol solve the racist attitudes held by the likes of Dylann Roof or others that reject racial equality?  No, but neither did the 13th Amendment, 14th Amendment, 15th Amendment, the Brown vs Topeka Decision, the Civil Rights Act, the Voting Rights Act, the Fair Housing Act, the Equal Employment Opportunity Commission or anything else since.  Yet there are those that insist racism is in its last throws.  The defeat of Nazi Germany and the removal of their swastika did not end anti-semitism.  However, the flag was removed.  Now the only place you’ll see it is coindidently flying beside the Virginia battle flag flown by those like Dylann Roof.  Realize this, he is 21 years old.  He was born in 1994.  Not 1894.  He waved the flag of hate and racism proudly.  The same flag flown in front of South Carolina’s State Capitol.  The same flag many claim it’s for their heritage.  That heritage has been hijacked and it is now a symbol for hate.  Why anyone would willfully want that symbol to continue to represent them and their heritage knowing the message it sends is beyond my abilities to understand.  Residents of states like South Carolina and Mississippi have a long conversation ahead of them.  Removing the flag will not end the conversation of racism.  However, the conversation can hardly begin until it is.

It is past time for serious people to stop with the tacit acceptance of a racist flag being waved and raise the white flag instead.