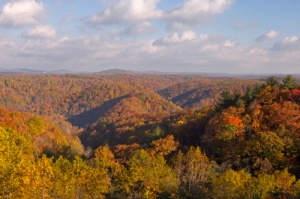 This weekend, I had the opportunity to visit a part of the Commonwealth of Virginia that I hardly ever visit.  And by “hardly ever” I really mean never.  I traveled to the most southwestern part of Virginia.  To know what I’m talking about if you think of Virginia as one triangle with a smaller to it’s left, I spent the weekend in the top peak  and the bottom left of the smaller triangle.  This region is due south of Detroit, Michigan and is actually closer driving distance to SEVEN other state capitols than it is to our own in Richmond.  It’s a unique part of the state.  It’s has a completely different feel than every other part of Virginia. In comparison, Hampton Roads(despite the name), is defined by our waterways.  Northern Virginia is defined by it’s proximity to the nation’s capitol.  Richmond has a touch of history mixed with a lived-in urban sprawl.  The Southwest however, it almost seems like an entirely different state and in some respects, it is.  It’s proximity to West Virginia, Tennessee and North Carolina give definition to region in a way that is a demarcation from other regions in Virginia.  It’s mountainous, driven by factory work ethic and curiously, DEEP conservatism.

The 9th Congressional District of Virginia, which represents the entire whole of the small triangle of Virginia, had been represented by long time Congressman, Rich Boucher, who served until 2010 when he was defeated by current 9th District representative, Morgan Griffith.  And as much as a mainstay Congressman Boucher was since 1982, his representation in the Southwest was an anomaly.  While very few regional and statewide Democratic candidates have enjoyed sparse support, over the last few generations, Republicans have dominated area politics.  Since 2000, Mark Warner is the only statewide candidate to have any success in the region during his run for Governor and his first run for U.S. Senate.  Every other Democrat has lost and it has not been close.  Most recently, As of the 2013 state elections, only ONE Democrat currently serves in the General Assembly from the region.

It was over the weekend, I had the opportunity to speak with one such member of the General Assembly from the region.  He was invited to speak about the region, the people and his electoral history and time in politics.  However, the topic inevitably turned to his voting record and how he feels specifically about the idea of Medicaid Expansion and assisting the disadvantaged in the region.  He repeated his opposition to Medicaid Expansion, expressing that he felt, that in essence it might be a good idea, but he said the government could not afford to do everything that might be for the public good.  Which principally, is a sound argument, but he also noted that he did not believe in offering Medicaid to able-bodied working adults.  And this was the point I felt the need to address.

Southwest Virginia is very much unlike the rest of the state.  It’s Appalachia.  It’s coal-country.  It’s the birthplace of Country music, but it is also the place of heartache and human despair.  The high school dropout rate his higher than the state average.  The Southwest has the lowest rate of college graduates than any other region.  Worse than this, the rate of prescription drug overdose is twice as high as any other region in Virginia.  Those living in the Southwest are 23% more likely to die of heart disease, 44% more likely to die of COPD, 30% more likley to die of diabetes and 54% more likely to die of liver disease.  Moreover, the percentage of uninsured is higher than the state average.  Not to mention, the unemployment rate is the highest in the state.   On top of this, state and federal public assistance dollars are spent in the region at a higher rate than any other part of the Virginia.

When the delegate told me that he not only is opposed to the Medicaid Expansion, but also felt that able-bodied adults should not have access to Medicaid, I couldn’t help but to ask about the region’s high unemployment rate and chronic health problems.  I wondered how both are among the highest in the state and if he does oppose Medicaid Expansion, what does he propose to help those that do need care and are not offered or are able to afford healthcare, which comprises a sizable portion of the residents that put him and others like him in office.  Again, despite his resistance to this particular brand of public assistance, the region continues to demand and receive social assistance for those that need it the most.  That said, despite the persistence of these problems for decades defining the region, the delegate in question was re-elected for 11th term in 2013 and will be re-elected for his 12th term in a few months, each with over 98% of the vote.  Jobs are leaving the region.  Health disparities have wrecked the region.  The region is under-insured, under-educated and heavily reliant on federal government assistance.  Yet voters continue to support candidates that have been unable to address these basic needs.  The best explanation for this dynamic is that these voters are “value voters” or voters who vote based on social interest and a candidate’s views on social issues than economic protection or personal progression.  It is those elements that these “value voters” don’t particularly value(pun absolutely intended).

The Southwest isn’t alone in this rather strict voting record.  The Southside, Eastern Shore, Shenandoah Valley all share similar traits.  Which is also shared by many southern regions in America.  These areas are filled with rural voters that are strictly conservative when it comes to social values.  And as it relates to economic values, as conservative as they might want to be, the need is there.  But the need for social services does not overvalue the demand for social conservatism.  Which, I suppose is their choice, however I cannot understand the willingness to continue to support candidates who may share a public view at the expense of a personal need.  The Southwest is struggling to keep up.  They know this, but do not desire political change.  What they do desire are the same political allies that cannot or have been unwilling to break a truly wretched way of life.